Krikor Djololian is regarded as one of the renowned Armenian photographers of the 20th century. His photographic output spanning over four decades tapped into a wide range of subject matter. However, it is his photographs of professional bodybuilders that commanded international recognition and garnered high accolades from the emerging physical culture movement in Europe and the United States. As his history reveals, Krikor Djololian’s early exposure to sports in Constantinople prior to the collapse of the Ottoman Empire had a profound impact on his professional life as a photographer in Paris. 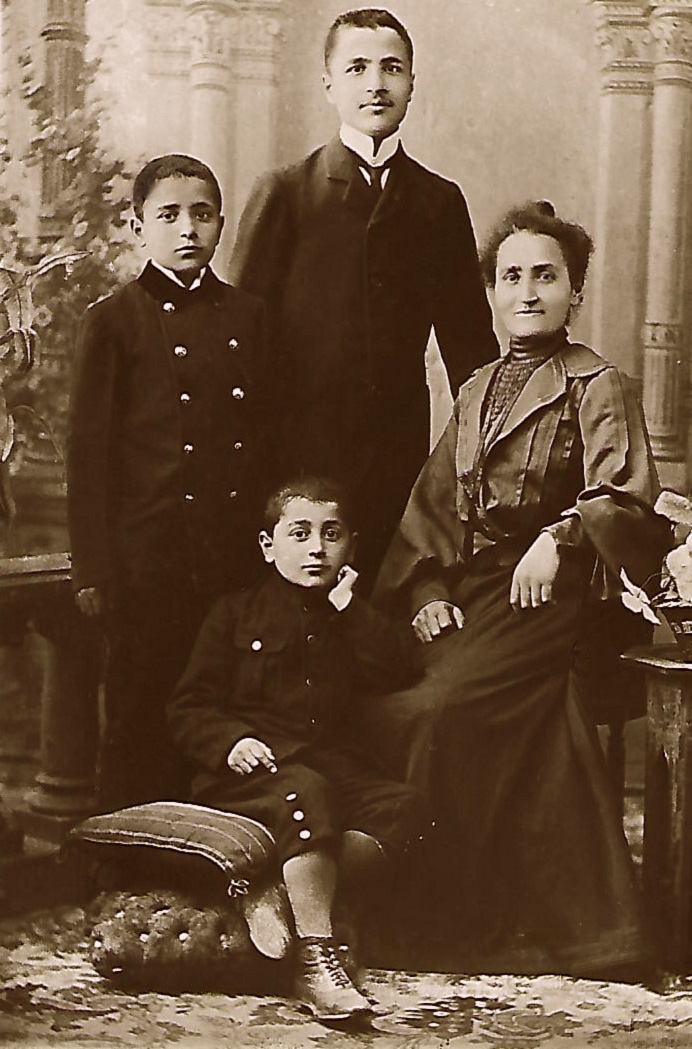 Krikor Djololian was born in Adapazar, Turkey on February 27, 1897. During the early 1900s, his widowed mother, Miriam, moved the family to Constantinople in order to seek employment that would afford her sons the finest level of education at the prestigious Essayan and Guetronagan School. The eldest son, Hagop Sirouni (1890-1973), rose to prominence as a journalist, writer and editor of several newspapers. Haig, the middle son described as a very talented young man, was destined to have a great athletic career. As the youngest of three brothers, Krikor Djololian immersed himself into sports and scouting events. Thus, athleticism and sporting competitions embraced by the Djololian brothers played a significant role in shaping Krikor’s personal and professional life. 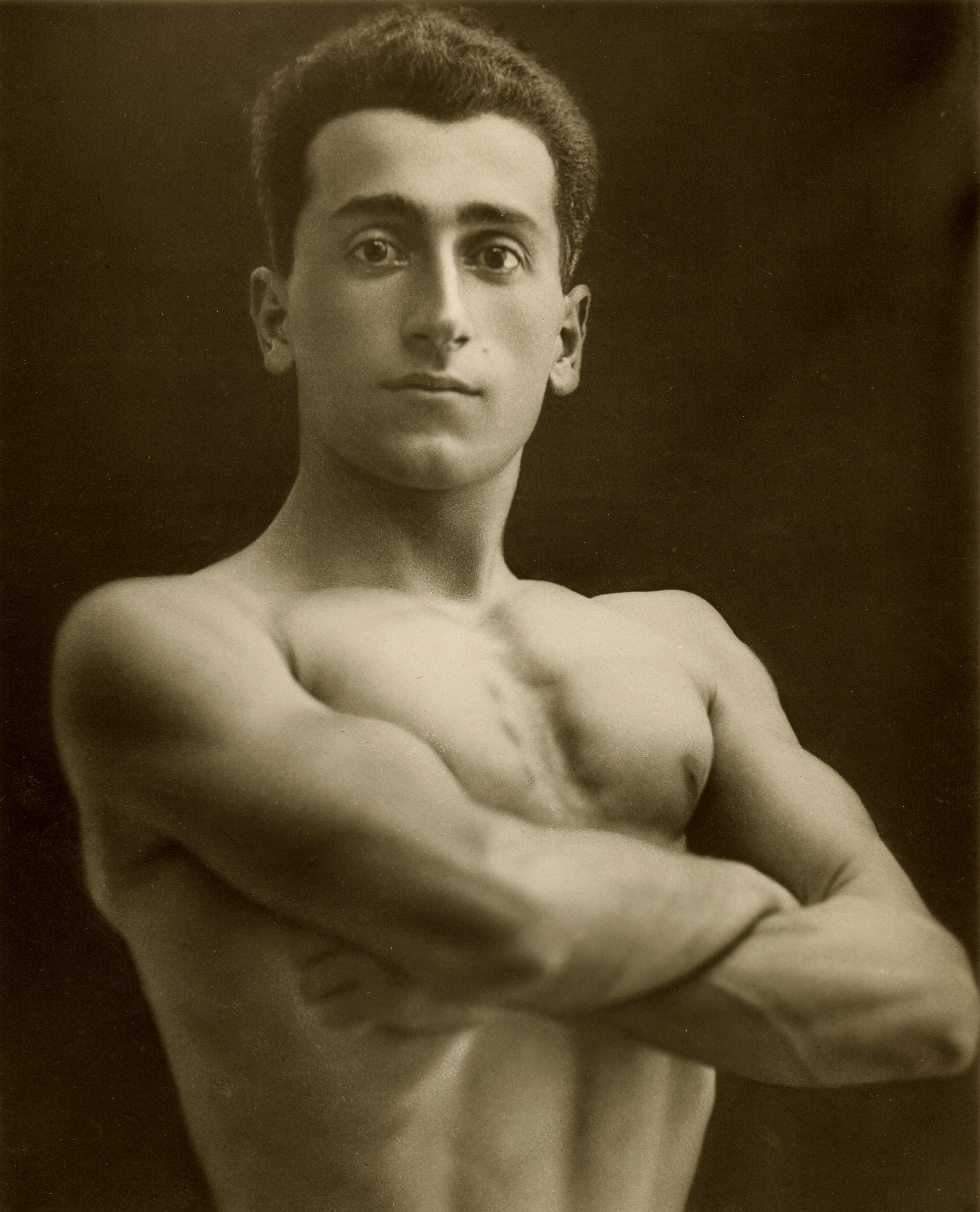 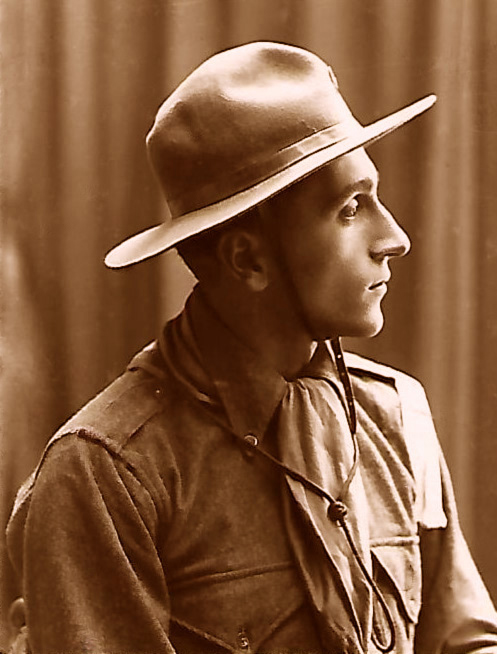 The Armenian Genocide of 1915 devastated and altered the destinies of the Djololian brothers. At the start of the Genocide, Hagop Sirouni was identified as one of the Armenian intellectuals targeted for arrest on April 24, 1915. He went into hiding for three years with a Greek family in Constantinople to avoid execution like so many of his compatriots. Having survived the Genocide, Hagop Sirouni left for Romania in 1920 and developed an outstanding literary career that spanned several decades. He is described as “a multitalented man of letters: a fairytale writer, a critic, a historian, a social commentator and an intellectual.” Tragically, with a different fate in store, Haig Djololian’s life ended when he was assassinated while serving in the Ottoman army during World War I. Krikor Djololian was arrested and deported in 1915. After the war ended, he returned to Constantinople and was reunited with his brother and mother. Very little of the events surrounding his deportation and survival during those traumatic years is known. His son, Patrice, has noted that his father rarely talked about his youth – “it was as if he concealed that time under a black canvas.” 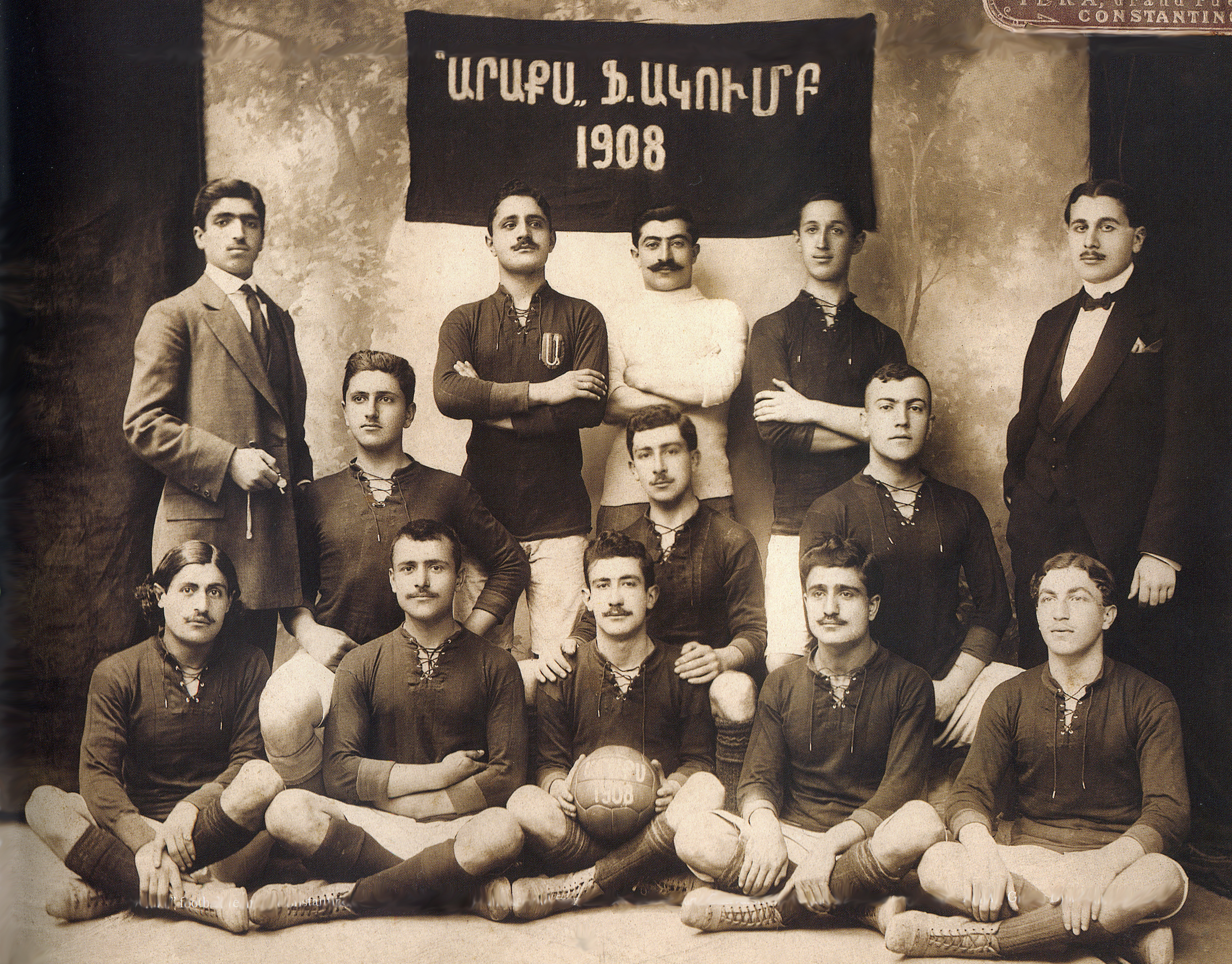 After the Genocide, the formation of a pan-Armenian sports association proved to be a significant development in the Armenian community of Constantinople. The Armenian General Athletic Union and Scouts (Homenetmen) was launched in November 1918 by prominent members in the Armenian community with the active support of Hagop Sirouni. The motto of Homenetmen – “Rise and Raise” or “Elevate Yourself and Elevate Others with You” – influenced Krikor Djololian’s decision to assume a leadership role within the Armenian community of survivors healing from the ravaging effects of the Genocide. As with many “stateless nations,” Nicholas Palluau and Marie Caquel note that “sports are an important vector of identity and a factor of national cohesion.” 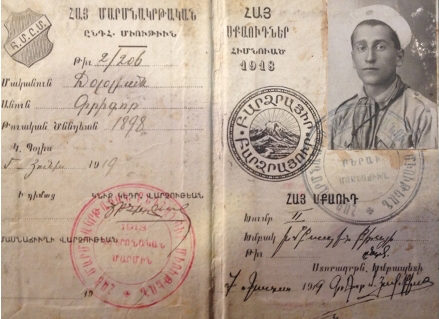 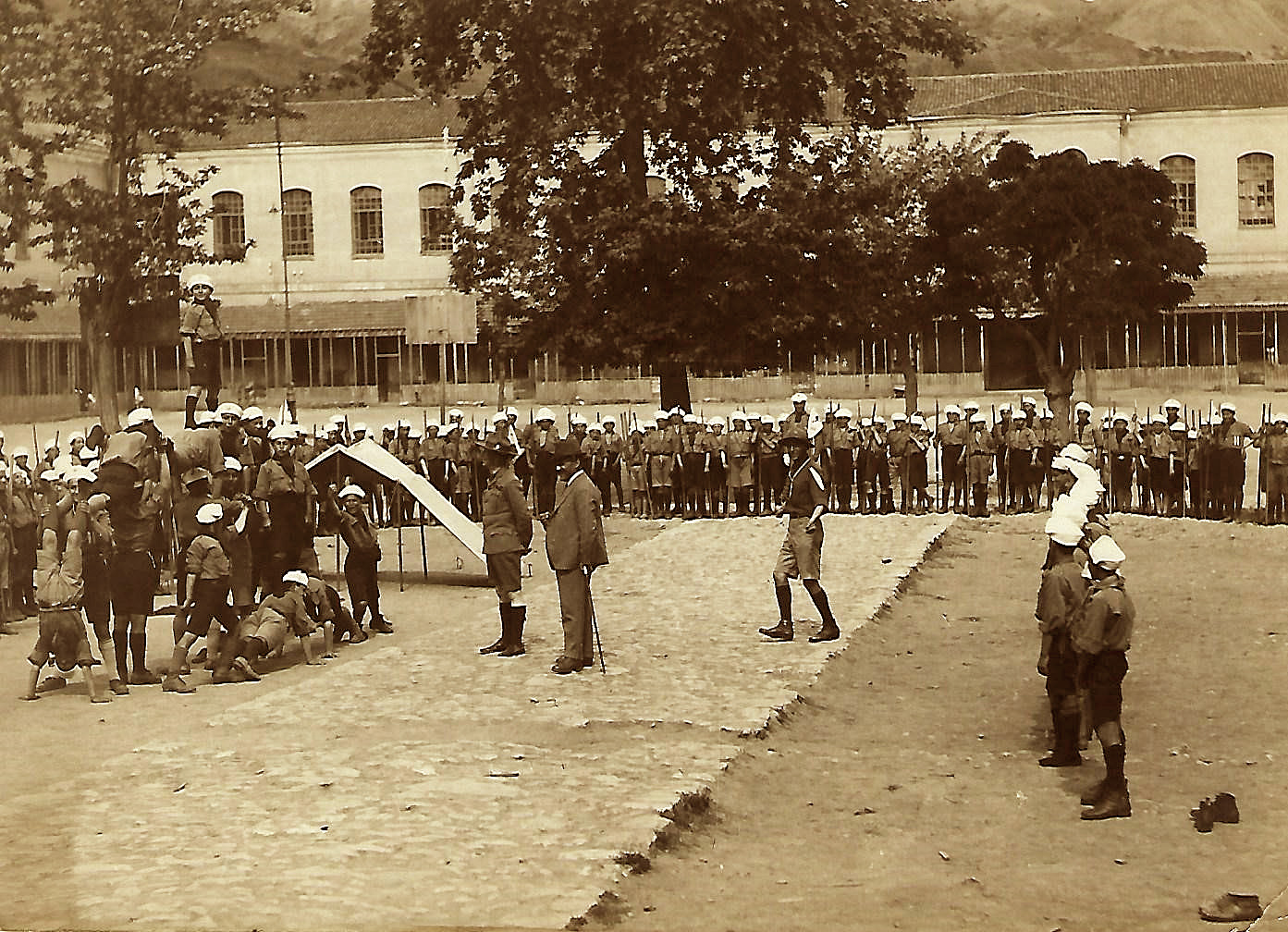 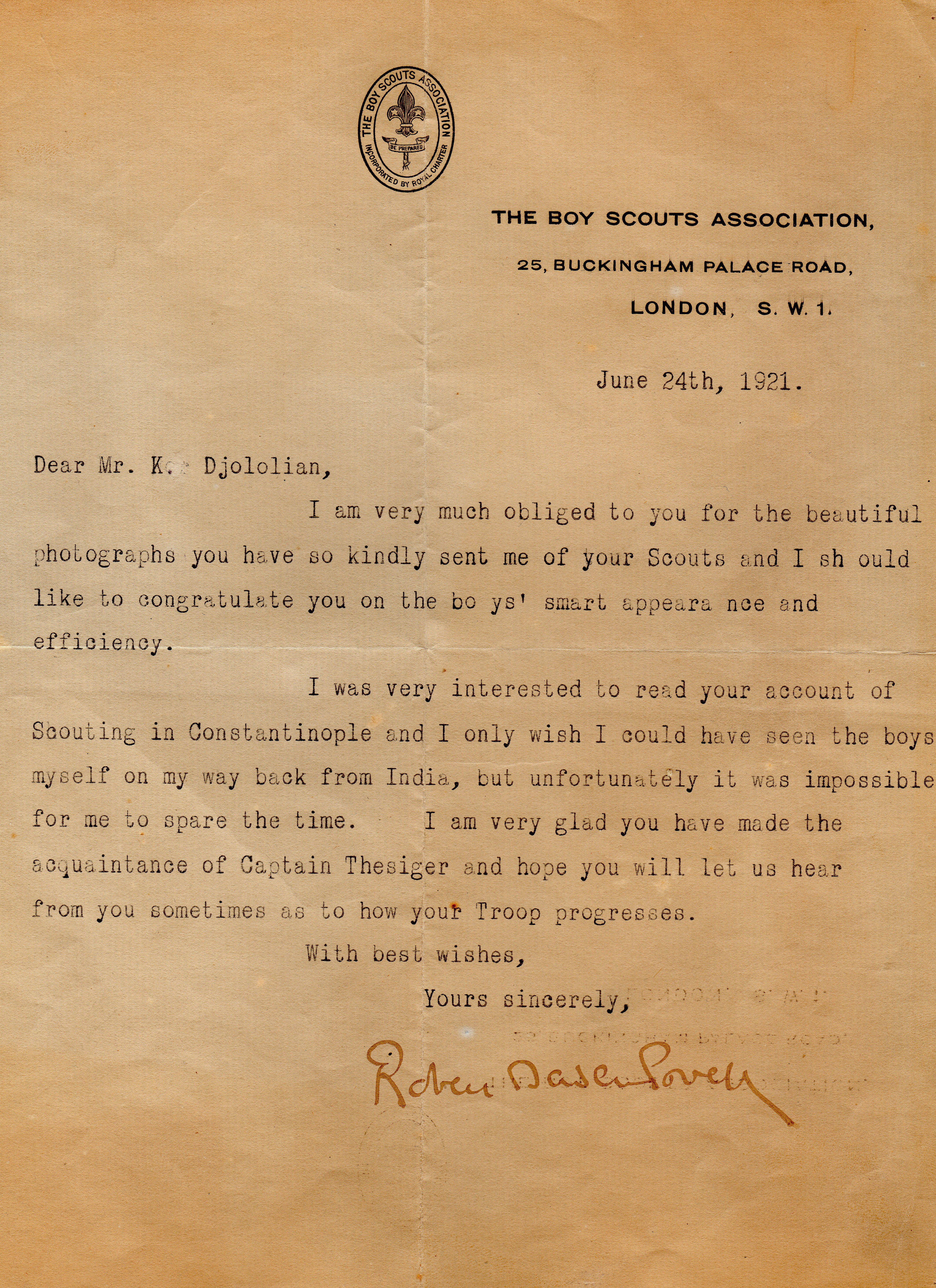 From 1918 to 1922, Krikor’s time in Constantinople was devoted to the organization of athletic competitions as well as leading a troop of several hundred Armenian scouts. It was during this period that he began experimenting and developing his photographic skills. It remains unclear how or with whom he may have acquired these skills. Many of his images during this period portrayed scouting events and athletic competitions. In 1921, Krikor received a congratulatory letter from Lord Baden-Powell, a British army officer, writer, founder and first chief scout of the Boys Scouts Association. In response to Krikor’s description of the state of Armenian scouting in Constantinople which was accompanied with photographs of athletic events, Lord Baden-Powell praised Krikor’s scouts for their “intelligence” and “efficiency.” Undoubtedly, Krikor’s photographs personified the rise of athleticism within the Armenian community. 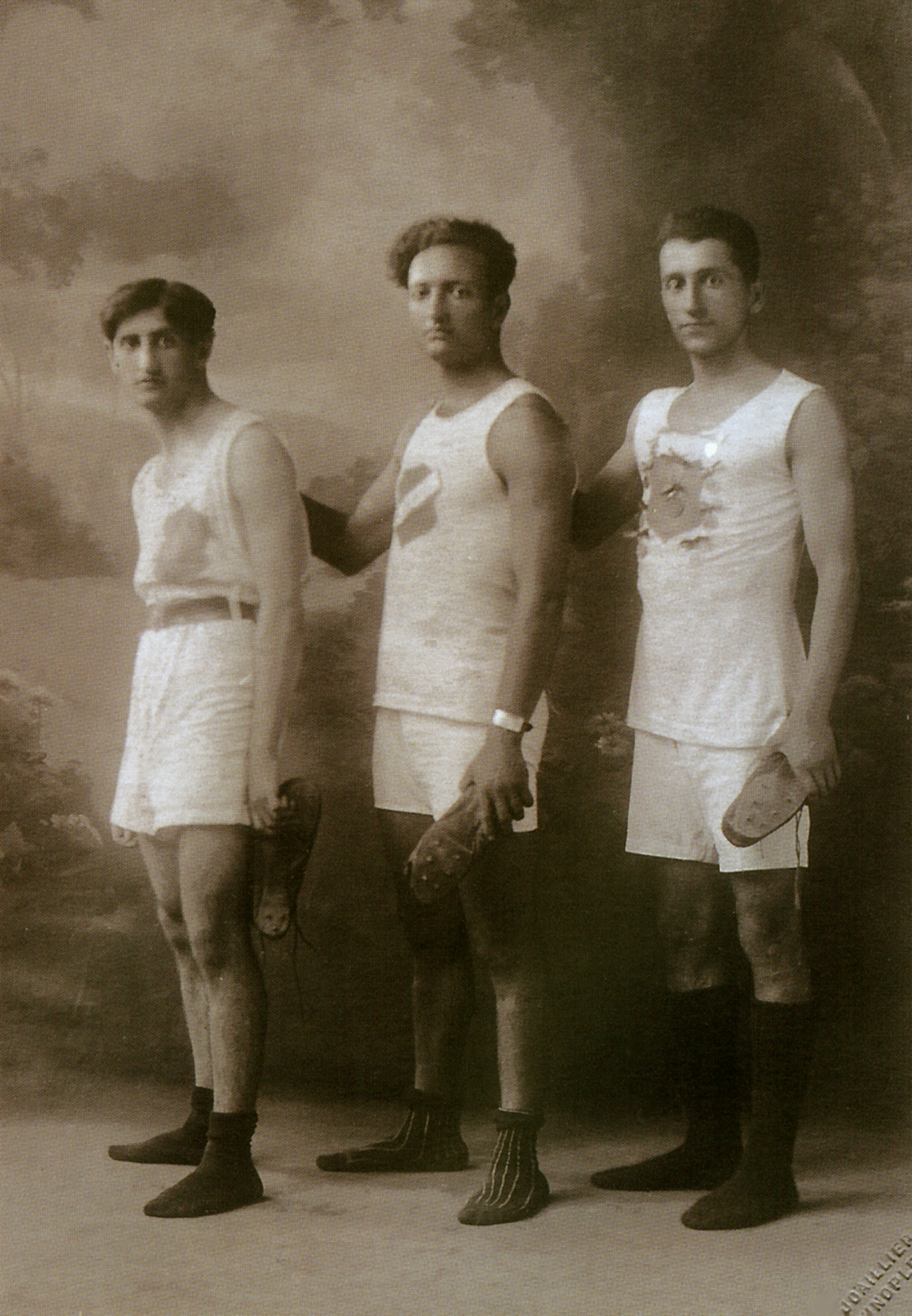 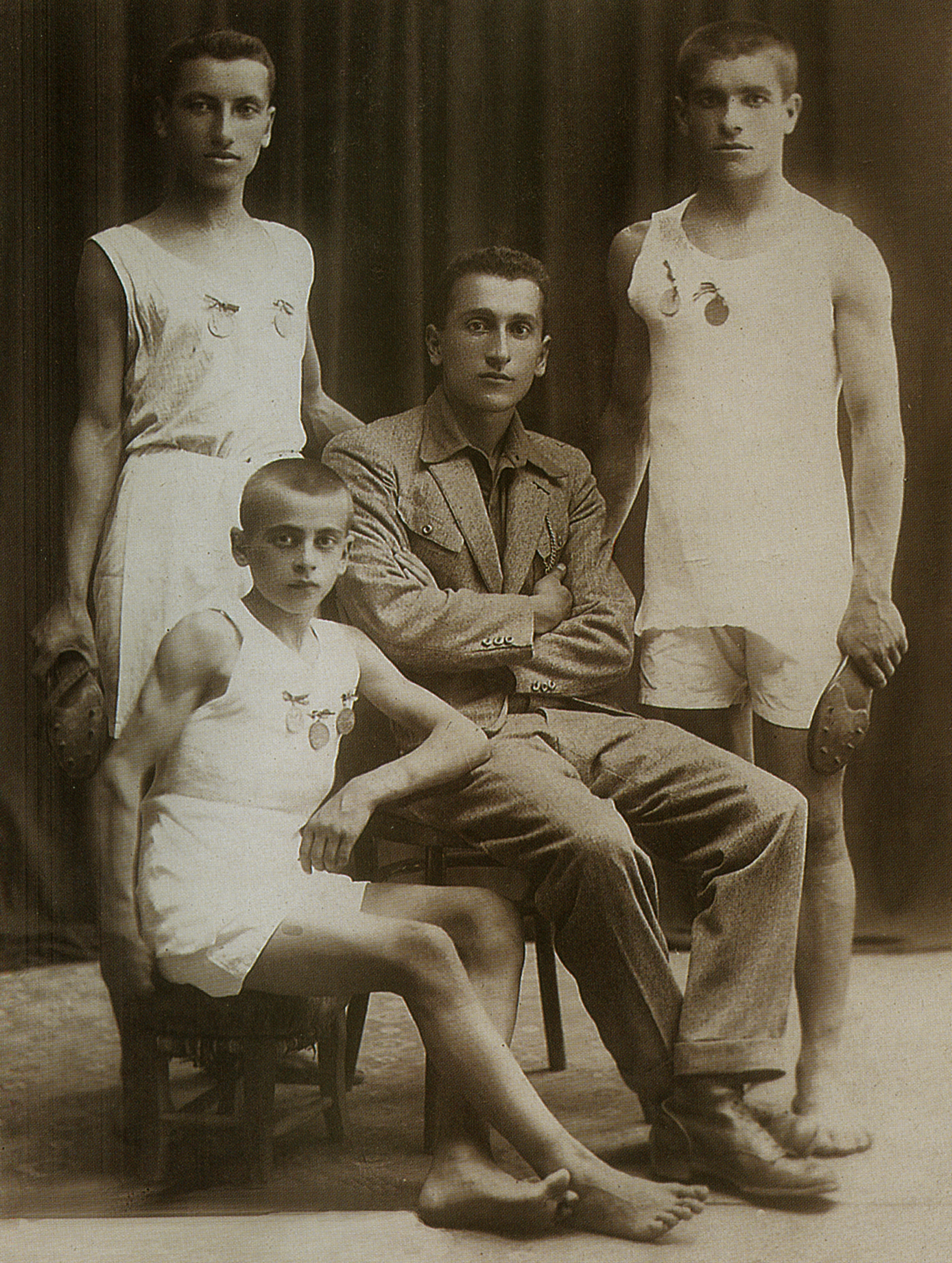 With the temporary occupation of Constantinople by the Allied troops ending on the heels of the Treaty of Lausanne, Krikor and his mother immigrated to Paris in 1922. Sometime before World War II, he became a naturalized French citizen, married, and had three sons. Sports and photography had provided a measure of success in Constantinople for Krikor. Hence, he embarked on a professional career as a photographer in Paris. He continued to organize athletic competitions within the Armenian French community. For his dedication and commitment to the advancement of sports, Krikor was awarded the Gold Medal from the French Ministry of Youth and Sports. 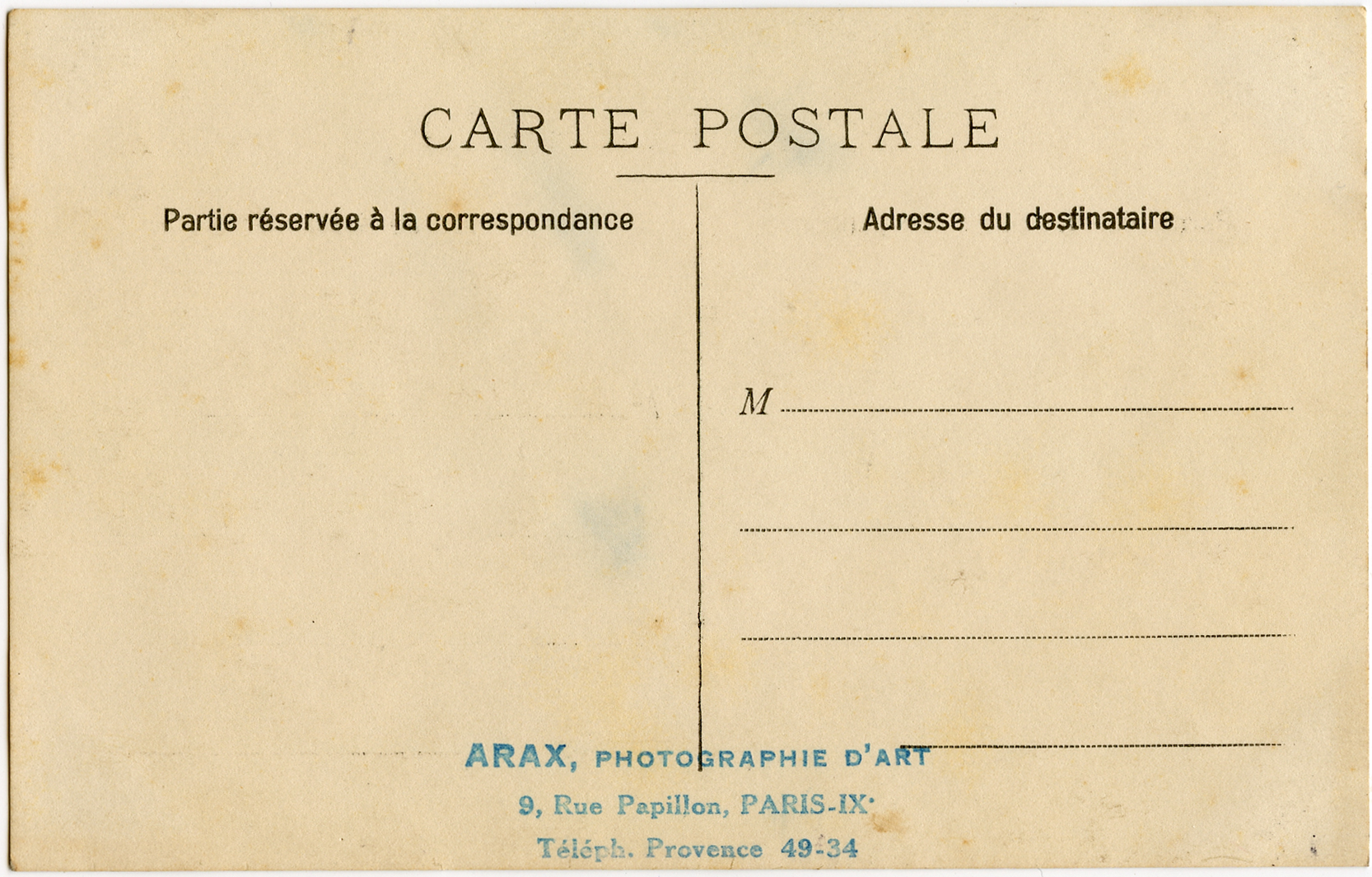 Once Krikor established himself in Paris in the 1920s, he opened a studio on 9 Rue Papillon which he named “Studio Arax,” and in the early 1930s he moved his studio to 31 Boulevard Raspail where he practiced photography until his death in 1975. Initially, he worked as a photojournalist collaborating with many Armenian and Parisian publications. Immersed in Parisian life, he not only engaged in studio portrait photography but he captured images of major events such as the artistic milieu of the Roaring Twenties, the Montparnasse balls of the 1920s, dancing championships of the 1930s, and the liberation of Paris in 1944 with Charles De Gaulle and Winston Churchill. Within the Armenian community, Krikor was privileged to witness and to photograph prominent figures and historic events such as the burial of General Antranik, the funeral of Komitas’ father, the 1936 visit of Franz Werfel, and the eminent French Armenian singer, Charles Aznavour, photographed as early as age four.

The physical culture movement promoted fitness, health, and muscular strength through regular exercise, participation in sports, and proper nutrition. It had its origins in the eighteenth-century revival of interest in classical athleticism, especially the artistic emphasis on the muscular form, and reached its height in the United States, Britain, and Europe from 1880 until 1930. Since the 1930s the physical culture movement developed into the sport of modern bodybuilding, with the emphasis gradually shifting from exercise done for the sake of strength and fitness to exercise as a means of shaping the body for aesthetic effect. 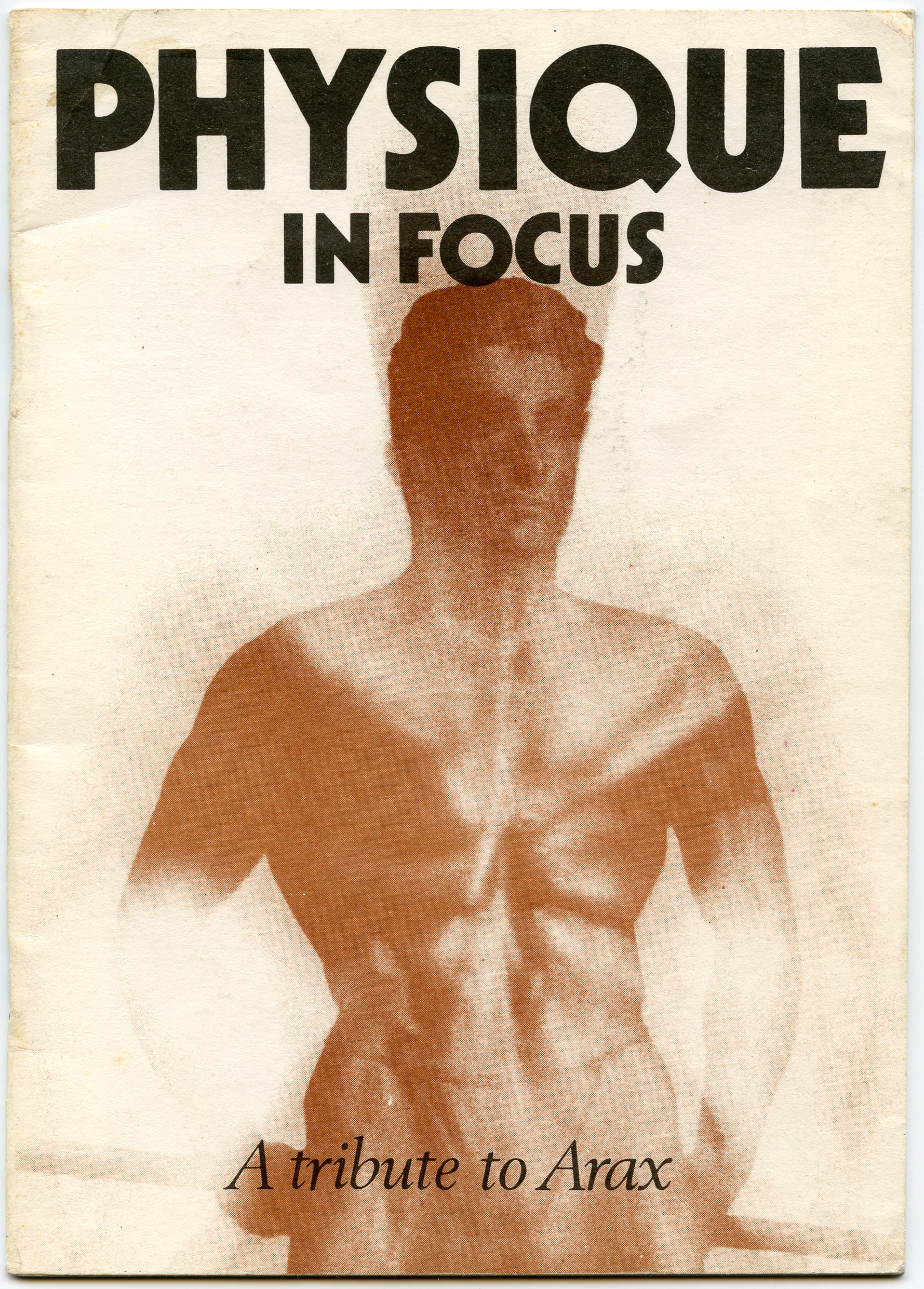 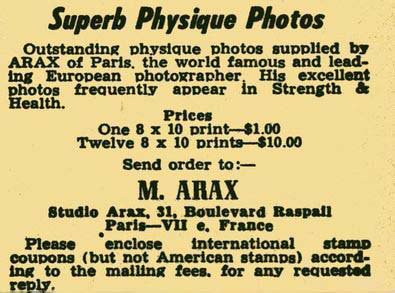 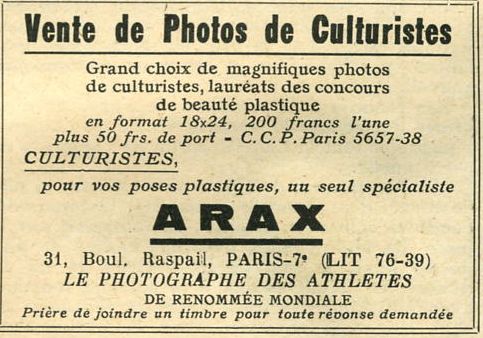 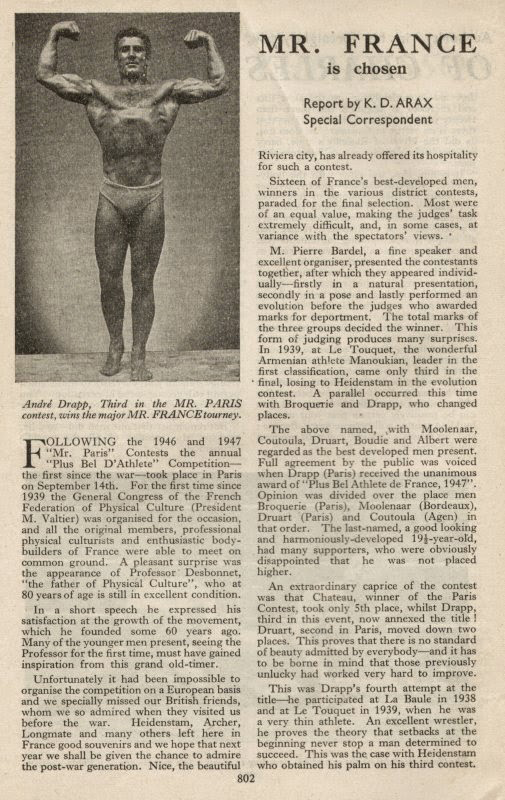 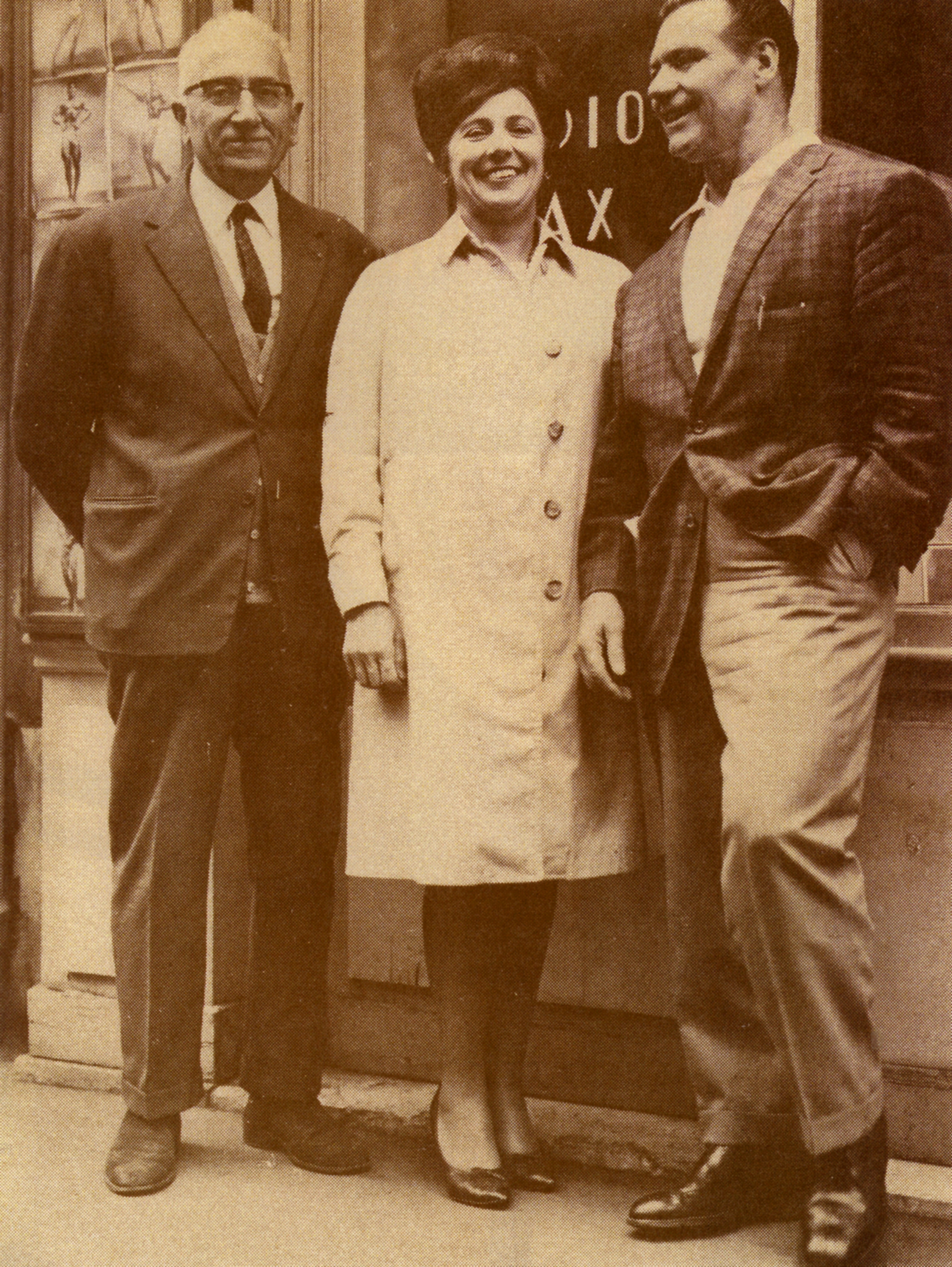 Krikor Djololian with bodybuilder John Grimek and his wife, Angela, outside of Studio Arax in Paris, ca. 1960

The ranking criteria of “symmetry,” “muscularity” and “conditioning” which had been used by judges at bodybuilding competitions were reflected in Krikor’s photographs of professional bodybuilders. His images of scantily clad or at times nude bodybuilders in flexing physiques reflected the ideal body proportions of ancient Greek and Roman statues. Among some of the world-renowned bodybuilders photographed by Krikor were Steve Reeves (Hercules at the cinema), Arnold Schwarzenegger (Mr. Universe), Robert Duranton, and as a young bodybuilder the actor Sean Connery. Krikor traveled extensively to all the major competitions in Europe where he “immortalized” the champions from these events. He was regarded as the official photographer of bodybuilders, and his studio became the “mecca for bodybuilders the world over.” From 1934 to 1975, Krikor contributed images of bodybuilders and periodically served as a correspondent for the British magazine “Strength and Health” which was one of the earliest publications devoted to fitness and bodybuilding.

Krikor Djololian passed away on June 26, 1975. He left behind an extraordinary legacy. He is remembered for his prolific archive of portrait photography as well as his images that documented important events in French and Armenian history. However, it is his captivating photographs of professional bodybuilders from the early period of the physical culture movement that afforded him worldwide recognition. Krikor Djololian is undeniably one of the outstanding Armenian photographers from the twentieth century whose imprint in the history of Armenian photography will be lasting and treasured.

Patrice Djololian is credited with providing the family history. I extend my appreciation for his collaboration.

Copyright of the images in this exhibition remains with the Djololian family and may not be reproduced without their permission.

Photographs of the bodybuilders in the exhibit section are in the Malikian Collection. They may not be reproduced or transmitted in any form or means without prior consent of Joseph Malikian.