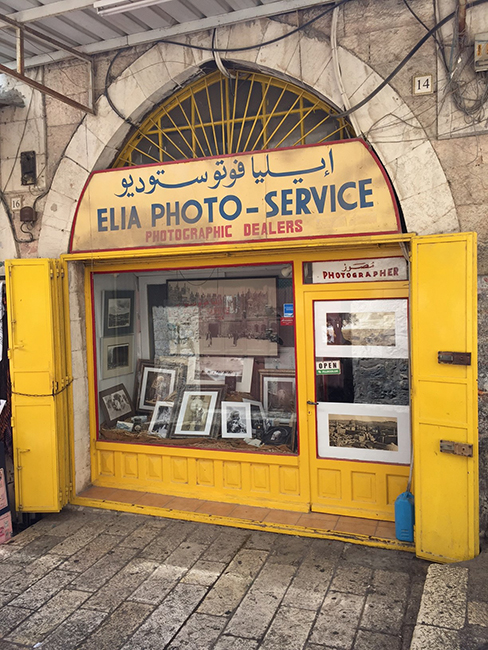 Elia Kahvedjian’s photographic compositions of Jerusalem and its environs before 1948 document the life and times of a culturally and socially rich era in Palestinian history.  These candid images of the Palestinians, their historic landmarks, and scenic landscapes document and reveal a time and a place comprised of diverse ethnic and religious communities that coexisted in relative peace and tranquility.  In contrast to Kahvedjian’s earlier images of Palestine dating back to 1924, his photographs of the 1948 war between the Arabs and the Jews reveal a darker side of a land that continues to experience conflict and strife.

As a survivor of the Armenian Genocide of 1915, Elie Kahvedjian’s life is a testament to a resilient will that endured the many traumas associated with ethnic cleansing, deportation, massacres, and loss. Kahvedjian was born in Ourfa, Turkey in 1910 and at the start of the Genocide in 1915 he was prematurely separated from his family. Following a series of harrowing events, he was placed in an orphanage run by the American Near East Relief in Nazareth, Palestine. Recognized for his artistic talents at the orphanage, Kahvedjian was invited to study photography under the direction of Krikor Boghosian. 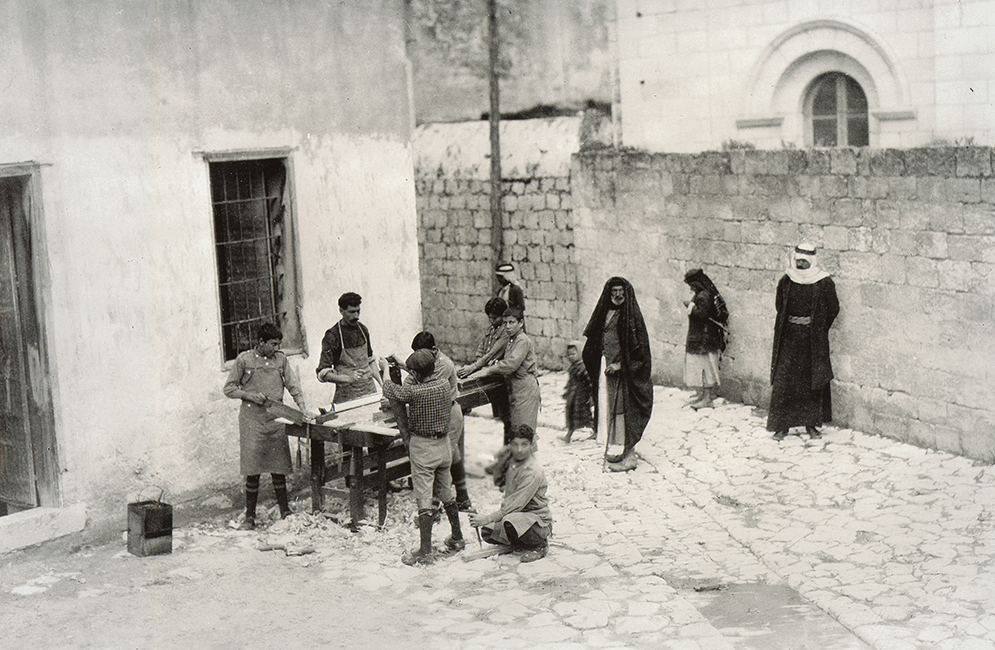 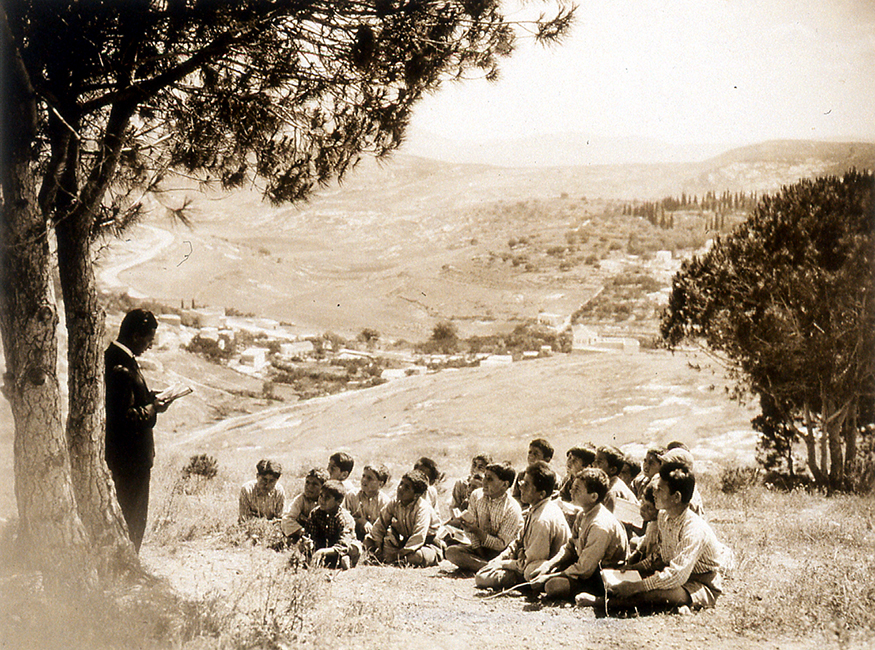 Kahvedjian’s interest and fascination with photography led him to Jerusalem at the age of 14 where he worked for the prestigious Hanania photographic studio.  In 1942, he took over the Hanania studio and established “Elia Photo-Service” which was regarded as one of the renowned Armenian studios in Jerusalem.  Since the introduction of the first photographic workshop and studio in 1858 by the Armenian Patriarch of Jerusalem, Palestinian Armenians pioneered and dominated the industry until the outbreak of war in 1948. 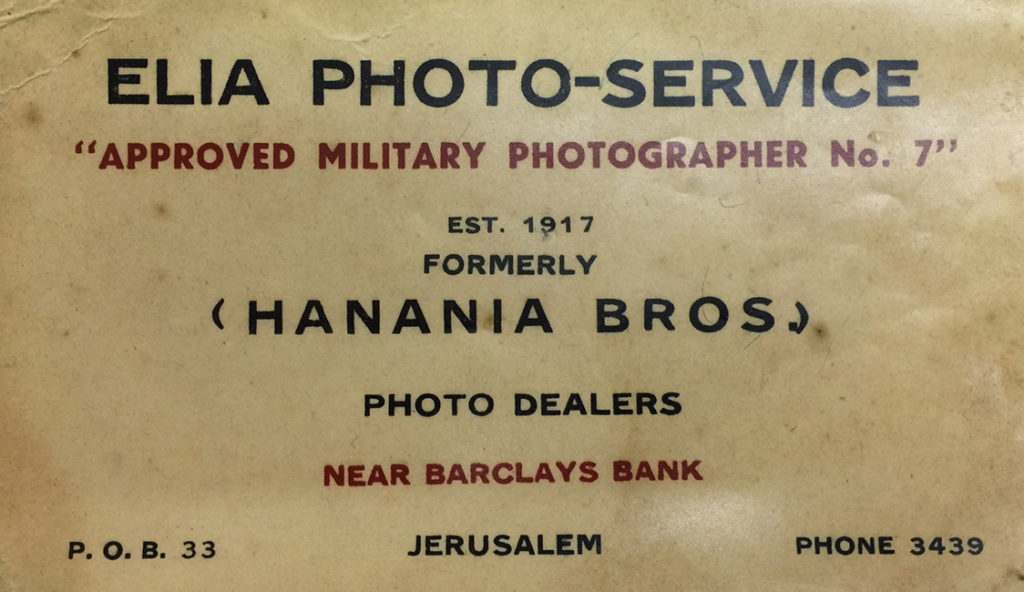 Elia Kahvedjian’s business card after acquiring the Hanania studio in 1942, and during the years he worked as a military photographer for the British army

In reflecting on the life of Elia Kahvedjian, Roberta Erving notes:

When he finally came to live in Jerusalem, Elia brought with him an eye already trained to see.  It was an outsider’s eye, an eye with no agenda beyond the pure delight of seeing what is there.  When he put that eye behind a camera, it captured Jerusalem’s reality just as it appeared to a young man from Ourfa, captured the essence of the ordinary, the depth in what was simply everyday Jerusalem.  A truly invisible photographer, he let his pictures speak for themselves.  They were an avocation, a personal collection. 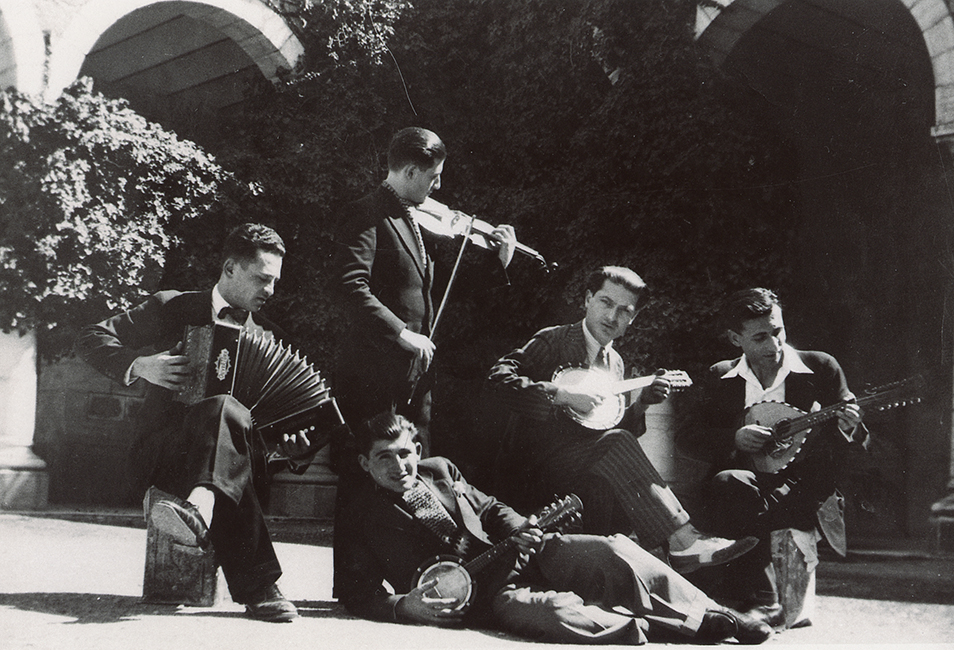 Kahvedjian’s documentary photography taken during the British Mandate period is undoubtedly an important visual representation of Palestine before 1948. From the portrait studios he worked for to the ones that he established, Kahvedjian periodically ventured out of the studio to capture images of Palestine and its inhabitants. Today, these images are regarded as a treasure trove of a lost but not forgotten homeland.  They document the memorable times of a land and its people that have been plagued by loss, conflict, and a lack of resolve since 1948.  Forewarned in 1948 by a British army officer of impending war between the Arabs and the Jews, Kahvedjian packed his photos and negatives and placed them in storage before leaving Jerusalem during the war.  He returned in 1949 to establish a shop in the Christian Quarter which is currently run by his son, Kevork, and his grandson, Elie.  Thus, two generations later the legacy of Elia Kahvedjian and the photographs he left behind live on.

Miraculously, some 1,400 negatives which were packed away and placed in storage prior to the war in 1948 were discovered in 1987 by Kahvedjian’s son who took on the labor intensive task of cataloguing and printing them.  In 1999, Kevork Kahvedjian compiled for publication a collection of his father’s most captivating images of Jerusalem and Palestine.  This “labor of love,” as he notes, culminated in a book entitled, Jerusalem Through My Father’s Eyes. 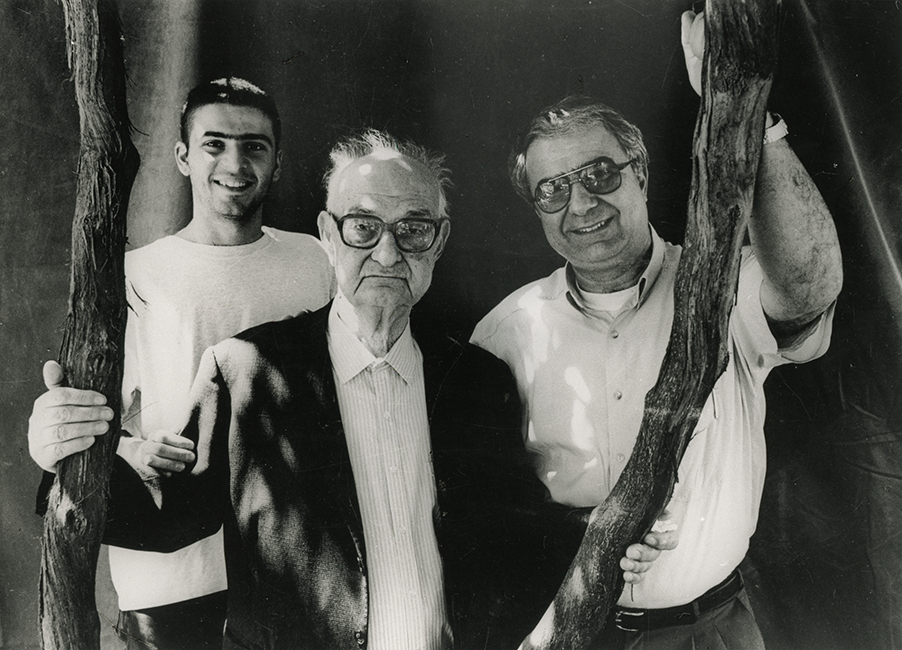 Three generations of the Kahvedjian family. Elia with his son, Kevork, and grandson, Roupen, 1998. Photo by Elie Kahvedjian

Copyright of images in this exhibition remains with Elia Photo Service and may not be reproduced without permission of the Kahvedjian family.